Not only fine dust, but also harmful gases pollute our ambient air and thus our health. Martin Klein, Vice President Cabin Air Filtration, talks in an interview about air pollution by nitrogen oxides, possible solutions and why filtration plays an important role. 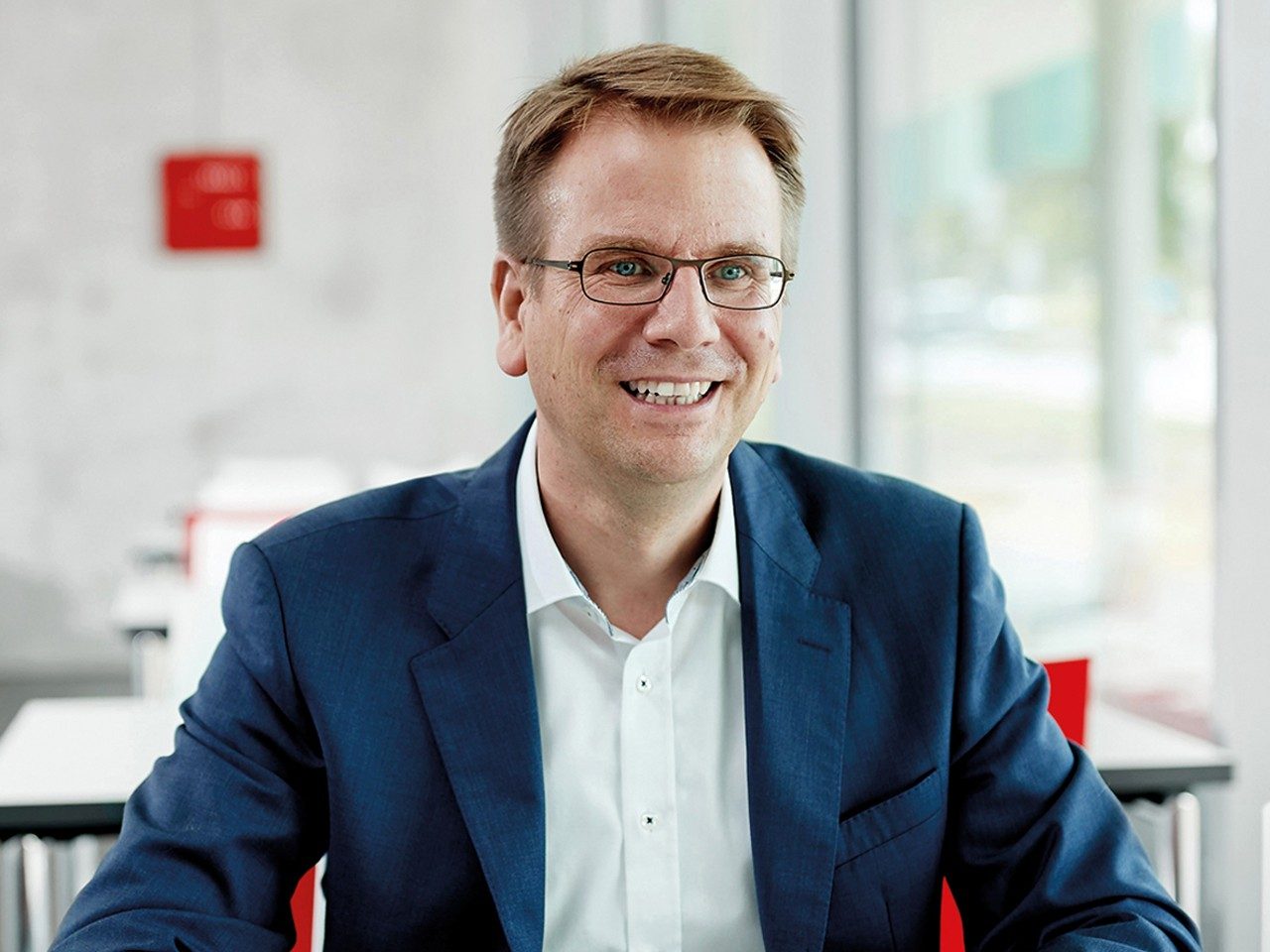 Martin Klein studied process engineering at the Karlsruhe University and since February 2017 has been Vice President Cabin Air Filtration at the location in Himmelkron, Germany. He started his career at MANN+HUMMEL in 2003 as a development engineer for fuel filter media and elements for the automotive aftermarket. In 2010, after projects at the Indian location in Tumkur, he moved to the department Innovation and Corporate Strategy and most recently managed national and international teams there. 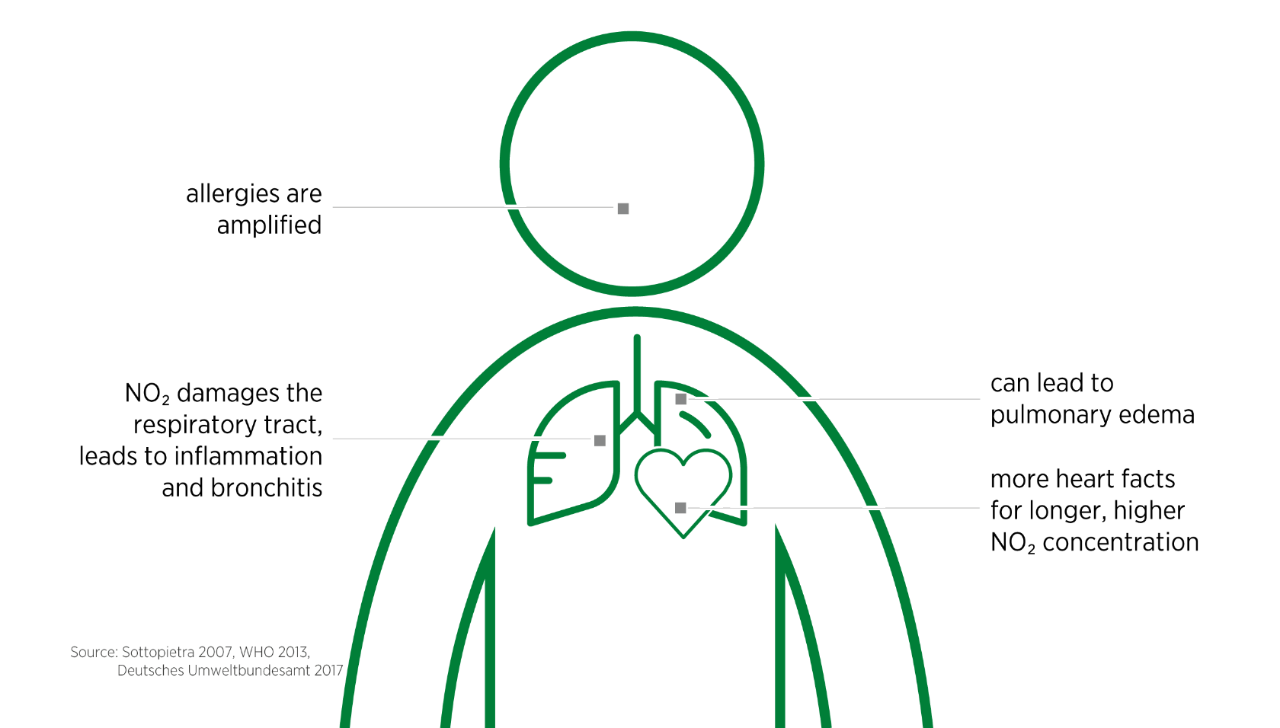 Impact of NO2 on health

Mr. Klein, in the current public debate on air pollution we frequently hear the term 'nitrogen oxide' mentioned as well as fine dust. What is nitrogen oxide exactly?

In addition to such solid matter, however, there are also a number of toxic gases present in our ambient air. These include ozone, sulfur compounds, ammonia, and also nitrogen oxides (NOx). These are gaseous compounds based on the atoms of nitrogen (N) and oxygen (O). The focus is on nitrogen dioxide (NO2) as already small concentrations of this gas over a longer time period can prove particularly harmful to people suffering from allergies or asthma or patients with other lung diseases. The concentration of nitrogen dioxide is therefore recorded at numerous measuring stations. Yet despite the public debate we should not panic.

The reports in the media have nevertheless had quite an impact …

Well naturally I have no wish to play down the subject. NO2 is an irritant gas with a pungent and harsh odor which enters the respiratory system. There it can trigger inflammatory reactions in the bronchi, lead to respiratory distress or even cause pulmonary edema and a restriction of the pulmonary function. The EU has therefore established a limit value of 40 µg/mᶟ for the annual average level of nitrogen dioxide. This value corresponds to the current limit values set by the World Health Organization. Unfortunately around the world there are a large number of cities which in part considerably exceed the value. But it is also true that just a short distance away from streets with busy traffic the concentration of nitrogen dioxide in the air decreases quickly.

What does that mean exactly?

In relation to Germany, the average annual value of nitrogen dioxide in cities or city suburbs is in the range of 20 to 30 µg/mᶟ. The lowest level of nitrogen dioxide pollution is measured in the countryside with average annual values of 10 µg/mᶟ. We should also consider it positive that in 2017 the limit values were not exceeded at over 400 of the roughly 500 measuring stations in Germany.

Between 1990 and 2015 the emission of nitrogen oxides decreased by 59%. The air quality in Germany is nowadays generally much better than it was just a few decades ago. The measurement data from the German Federal Environment Agency shows that the concentrations of nearly all recorded pollutants since the eighties have considerably and continually decreased. This is a very good development which is also the case in other European and a number of Asian countries such as Japan. 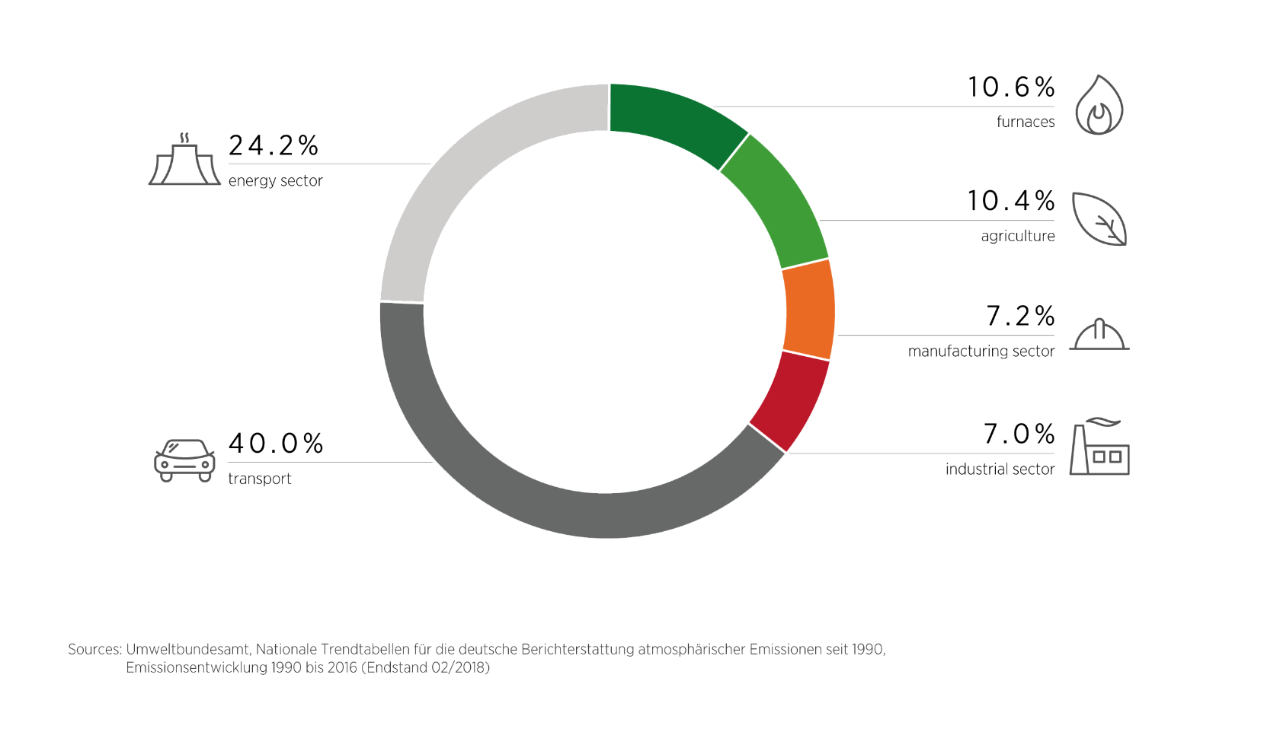 Nevertheless pollution levels remain very high. Where do these nitrogen oxides in the air come from?

Worldwide nitrogen emissions unfortunately continue to increase. Nitrogen oxides are unwelcome by-products of combustion processes. These combustion processes take place naturally or are introduced by humans in connection with agriculture, households, the energy industry or industry. The main causes of nitrogen oxides in Germany, however, are the traffic emissions and in particular the emissions of diesel cars.

Which further measures could be taken to reduce pollution? Are driving bans the only solution?

The technology to reduce nitrogen oxides using an SCR catalytic converter has already been established for some years and the effectiveness of the technology has been verified. But unfortunately up to now its potential has not been fully exploited. In my view driving bans are a very drastic measure. If driving bans could be implemented in practice, they would naturally be an effective tool against local air pollution, but at the same time would create considerable problems for commuters, local businesses and diesel drivers. While on the one hand it is important to improve the infrastructure in order to reduce the traffic burden in the affected inner-city areas, on the other hand it is also essential to further establish effective technology to clean the exhaust gas of vehicles. In addition, one approach could also be to use air filters in the affected areas. MANN+HUMMEL is currently developing such a technology which is designed to reduce the level of nitrogen dioxide at locations with a particularly high level of pollution.

It will most probably, however, take quite some time before the NO2 emissions can be significantly reduced, as was the case with the reduction of sulfur dioxide emissions in the nineties through the introduction of low sulfur fuels. As a result, car drivers on busy traffic routes or in tunnels will continue to be exposed to high concentration levels of NO2.

Does MANN+HUMMEL have any products which protect against nitrogen dioxide?

Nearly all vehicles today are equipped with a cabin filter, sometimes referred to as a pollen filter. Pure particle filters, however, are unable to retain gases. This requires the use of an activated carbon filter. Activated carbon has a very fine pore structure which binds the gas molecules. We are able to combine different layers of activated carbon in one filter medium. This allows us to exactly specify our filters so that they can reliably retain a variety of harmful substances, including nitrogen dioxide. In addition to the layers of activated carbon, in our filters we also use additional layers of filter media to protect, for example, against fine dust, allergens or pollen. These so-called combi filters are available for all types of vehicle and have proven their effectiveness in countless tests.